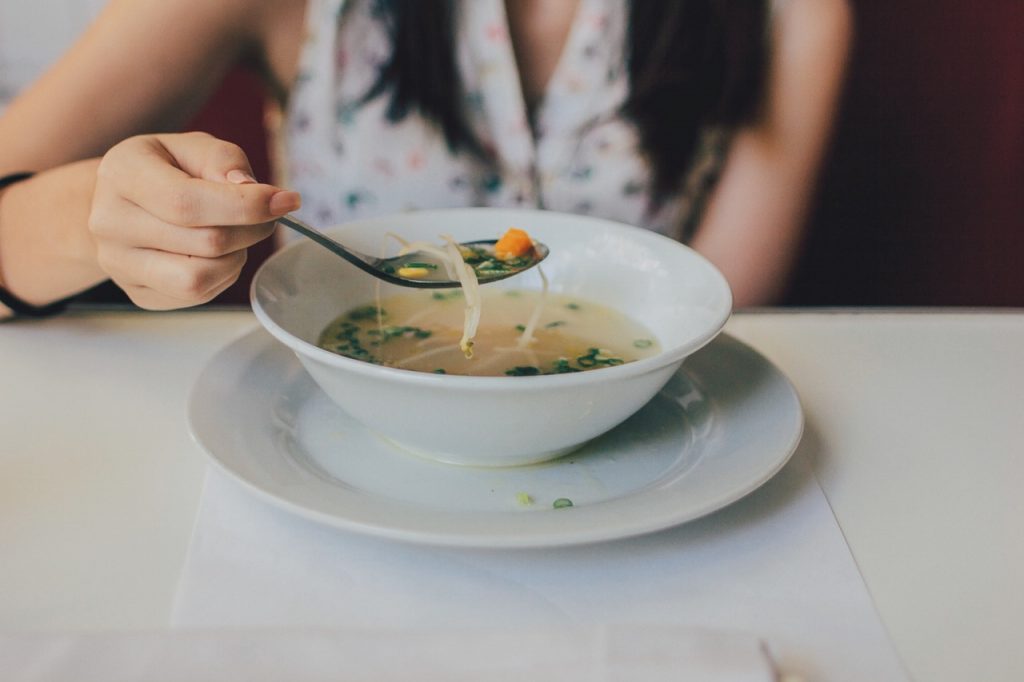 I am a naturopathic doctor. I am a Jewish mother. Combine those two things and you get – THE QUEEN OF CHICKEN SOUP!! I do not take that title lightly.

Chicken soup is a staple in my house – all year, but especially during autumn and winter. From a traditional Chinese medicine point of view, bone broth strengthens the wei qi (defensive energy) and nourishes the Liver and Kidneys. From a western nutrition standpoint, bone broth is high in minerals and amino acids that heal the intestines and support our immune system. And you know that whole Chickensoup for the Soul series? They’re on to something. The smell of a house with a big pot of chicken soup simmering on the stove… the best. Sitting over a steaming bowl of chicken soup, slowly sipping the rich broth, melty bits of chicken and soft vegetables… no, that’s the best.

I combine a bone broth with traditional chicken soup to get the best of both worlds. As soon as there is a sniffle or cough… out comes the soup. When asked what he would like for dinner, my son will nine times out of ten ask for chicken soup (that kid really know the way to a Jewish mother’s heart). And, cooked in broth, both of my kids will eat a remarkable amount of vegetables. I add bone broth to tons of other recipes (I cook rice in broth, add it to curries, stews, etc…). I’m sharing my recipes (for both broth and soup) – because everyone should be able to make a great pot of chicken soup.

Bone Broth
I mostly use chicken bones since we eat a lot of roasted chicken at my house. I buy whole organic chickens (very reasonably priced at Costco), butterfly them (thank you YouTube) and bake them at 450 for 45 minutes – much faster than a traditional roast chicken. However, you can use any bones to make a bone broth – chicken, turkey, beef, bison, lamb, pork, fish.

Add all ingredients to a large pot. Cover with water. Bring to a boil and then reduce to a simmer (covered) for at least three hours. Strain all of the bones and vegetables out.  Ta-da! Bone broth. When cooled, bone broth becomes slightly jelly-like. That’s all of the collagen and amino acid goodness. Heat it and it’s back to liquid.

Tara’s Chicken Soup
This is my basic chicken soup recipe, but it changes depending on what I’ve got in the refrigerator.

Pot of chicken stock
1 large onion, finely chopped
2 cloves garlic, finely chopped
4 carrots, chopped
4 stalks of celery, chopped
2 Tbsp fresh dill, chopped – I chop and freeze fresh dill in ice cube trays with a little water. Otherwise, I’ve always got a soggy bag of dill going bad in the back of my fridge.
Chicken – I generally add 1/4-1/2 of a leftover roast (already cooked), but you could certainly add raw chicken to the soup as long as you make sure that it is thoroughly cooked.
2 flavour packets – this is what I call the dripping from a roast. Since we’re not big gravy people, I keep all of the pan drippings from my chickens in glasses in the fridge. The fat creates a seal over the “flavour packet” and doesn’t need to be additionally covered. When I’m making my soup, I scrape off the fat and just use the congealed goodness underneath.
Sea salt and pepper to taste.

Basically, just throw everything except the dill into the pot, bring to a boil and then simmer for 30 minutes. Add the dill in the last five minutes. If the soup is going to be a starter, then I leave it at this. If it is going to be the meal I’ll add cooked rice or potatoes (add in the last 10 minutes of cooking) and other vegetables – zucchini, cauliflower, broccoli, sweet potato… really anything that’s hanging around. Sometimes I will chop kale very finely and add it as well. Mushrooms are a great way to further support the immune system.

« So, what is normal anyway?
Introducing The What is…? Series »

Tara Anchel, N.D., is a primary health provider working in a downtown Ottawa clinic. Using safe, proven and effective natural therapies, she focuses on preventive and restorative medicine to treat a wide variety of patients and health concerns. She is currently taking new patients.

Ready to bring your health back into balance? Appointments can be booked online.

Recently on the Blog

Bring your health back into balance naturally

Sign up for our newsletter for extra tips on how to keep your health in balance. Your email will never be sold or shared.